A sensation in the world of video games, Arthur Maxson, also known as Elder Maxson, is the hero of a high profile video game, Fallout 4. The fourth main game in the series, Fallout 4, was released for the gamers to enjoy on November 10, 2015. An action role-playing game, Fallout 4 gives a thorough experience of adventure and savage fights. Arthur Maxson is known for his exceptional skills and his iconic Elder Maxson Costume!

A role model for the Brotherhood of Steel, Maxson’s story in the game begins from the year 2267. Featuring Holocaust in the Commonwealth, the story of the game is as fascinating as its characters. With a legendary plot and highly skilled fighters, Fallout 4 is doing amazing in terms of popularity. Maxson’s transformation as a leader happened at an early age. He learned lessons throughout his struggle and introduced the Brotherhood of Steel.

Get the exclusive coat Elder Maxson wears in the game to create the cosplay of the year! But the cosplay requires a few more items to give you the exact look Elder Maxson’s carries. Check this space out to know what exactly you need to pull off this savage mercenary’s look! The famous Battlecoat is a long knee-length thick coat with a quilted inner lining to make it more appealing. The belted front lures in all the fans of rugged styles while the additional pockets make sure it stays chic. The Brotherhood insignia on the exterior side and the armor protection makes it an irresistible item for Fallout 4’s loyal fans! 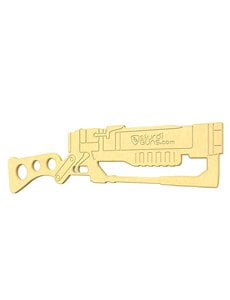 Another important item on the list, Maxson’s gun, is an important part of his personality. He carries it all the time, and all his fans know the worth of this weapon. While cosplaying your favorite fighter, do not forget that you exist in the real world, and carrying guns for fun is still not acceptable. Get the wooden gun, which comes brilliantly crafted and offers ideal vibes for the tough look. Make your wooden gun look authentic by using this spray! Your cosplay game needs to be ten on ten from all aspects. Hence, a green gun is a must-have. Ever wondered how Maxson’s persona is so huge and why he is always exerting power? It could be his black leather jacket under the Battlecoat. Elder Maxson Costume has multiple layers, making it impossible to glance away from this gem. The belted collar of the jacket offers comfort as well as the authenticity only a coat was lacking. Buckles and belt will not be available with the original Battlecoat. Putting in your efforts will yield in the end when you have everything assembled. This simple belt will do the job for you! Costume outfits are often ruined by a mismatched pair of footwear. These boots are as accurate as they come! Elder Maxson’s cosplay will look a hundred percent authentic with this sturdy pair of boots you can even utilize with your regular outfits. It is a great investment for men! The battle style outfit Maxson’s carries consists of simple black pants as well. These details make the cosplay easy and comfortable. Once you have everything you need, no one can stop you from turning heads in this iconic outfit! You will be the center of attention in this cosplay attire; therefore, maximum mobility will be required. Get these neutral belts to make it a comfortable cosplay for you and later use it in the regular wardrobe. This costume is incomplete without Elder Maxson’s weapons, and for those weapons, a holster is equally important. A back holster Maxson uses to hold his gun is highly important to pull off the complete look.

All these items hold their unique importance in assembling Elder Maxson Costume! As difficult as it looks from the outside, it is far easy to pull together. The best part about this costume is that multiple items can be used in regular wear as well. Portray your favorite leader in the coming comic-cons and cosplay convention with the help of this extensive list!