When comes to your mind when you hear or read the word ” Terminator”? Probably, a creepy creature that eliminates the innocent people or a weird figure from comics? Well if you are a movie geek, you know what the badass Terminator is all about. It has been decades since Arnold Schwarzenegger first appeared on the big screen playing the famous robot who kills the bad guys and saves the good ones. As a typical fan of the Schwarzenegger, I would like to draw your attention towards the Biker Leather Jackets he has donned over the years in the Terminator series. So, scroll down to discover the unseen and the unnoticed.

In order to enable a massively serious attitude to The Terminator, the designers bestowed him fascinating outerwears in each and every film of the series and the Motorcycle Terminator 3 Jacket is one of them. Coming to the point, the only two features that will make you want to have it are its black stripes on the sleeves and the built-in belt. These voguish features remind us of the vintage style and the trend which used to dominate the 80s.

For the Biker Fans 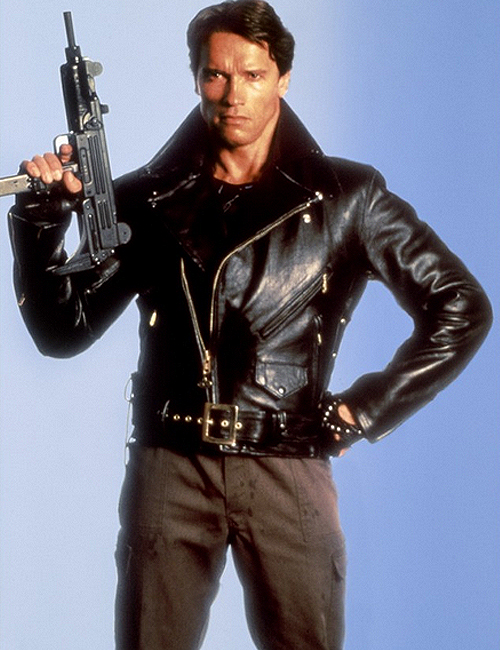 It is not surprising to know The Terminator is quite popular among the bikers for his fashion choices. Not to mention, but it seems like as if the Arnold Schwarzenegger Terminator Leather Jacket is made for the bikers to support them in their long rides. The notable most features include YKK zipper closure with an additional belt. Putting on the sunglasses, drifting, one wheeling and showing up a serious attitude is nothing hard for the emotionless robot who can be the ultimate boss of your biker gang. You can give a try to his choice if you are one of those passionate biker fans of him.

The most fabulous fashion adoption of Scharwzeneger in the series is the Terminator 5 Arnold Schwarzenegger Jacket which makes him look like a badass gentleman ready to knock out anybody who threatens to come in his way. Structured using real leather, a few features of the said outerwear are untraditional such as the polyester lining inside which is a bit rare to find these days. Furthermore, designers have also added zipper hem cuffs and padded shoulders to extend the list of specifications.

The Latest Addition to The Terminator’s closet

We know black jackets have been used by the secret service agents and the hitmen which is why The Terminator has been mostly seen in a black outfit.  He is supposed to look better than the rest while having been equipped with weapons while the black jacket guarantees a charismatic look with an enhanced attitude which makes the wearer look like a person nobody is supposed to mess up with. Therefore, even in the latest installment to the Terminator series, the pro-humanitarian robot is spotted in black-colored outerwear or in other words The Arnold Schwarzenegger Terminator Dark Fate Leather Jacket while wiping out